Le Signal, built in 1967 in Soulac-sur-Mer, is under threat from erosion. On 8th December 2014, an municipal order obliged all the residents to permanently evacuate their apartments. Once abandoned, the building was vandalised.
Since December 2014, my work on Le Signal has incorporated several installations, drawing inspiration from successive events, scientific data collected and the building’s progressive deterioration. This project will end with the destruction of Le Signal.

Here we’ve been happy, on the Signal, from the road
Photograph from the projection on 1 December 2014
– 1 digital photography, High resolution, colour 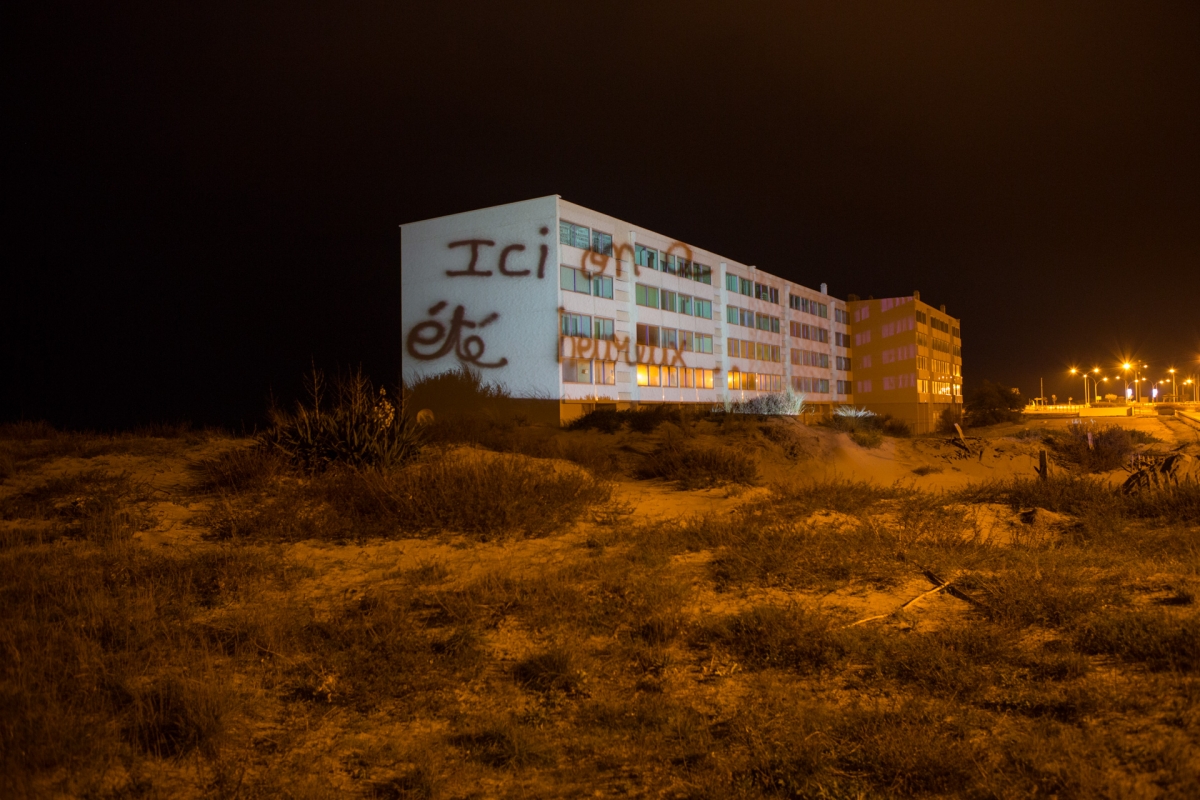 Orange curtains on the Signal, from the beach
Video and 3 photographs of the projection on 9 December 2014
– 1 video, 1080, colour, silent, 3′, looped
– 3 Digitals photographs, High resolution, colour

18 curtains
Installation consisting of 18 videos taken from the windows of the Signal between 2014 and 2019.
Each video: 1080, colour, sound, from 30″ to 3′, looped
Variable dimensions
François Schneider Foundation Collection

Ocean on the building, from the beach
1 video and 1 photography of the projection on 9 December 2014
– 1 video, 1080, colour, silent, 1′, looped
– 1 digitals photographs, High resolution, colour 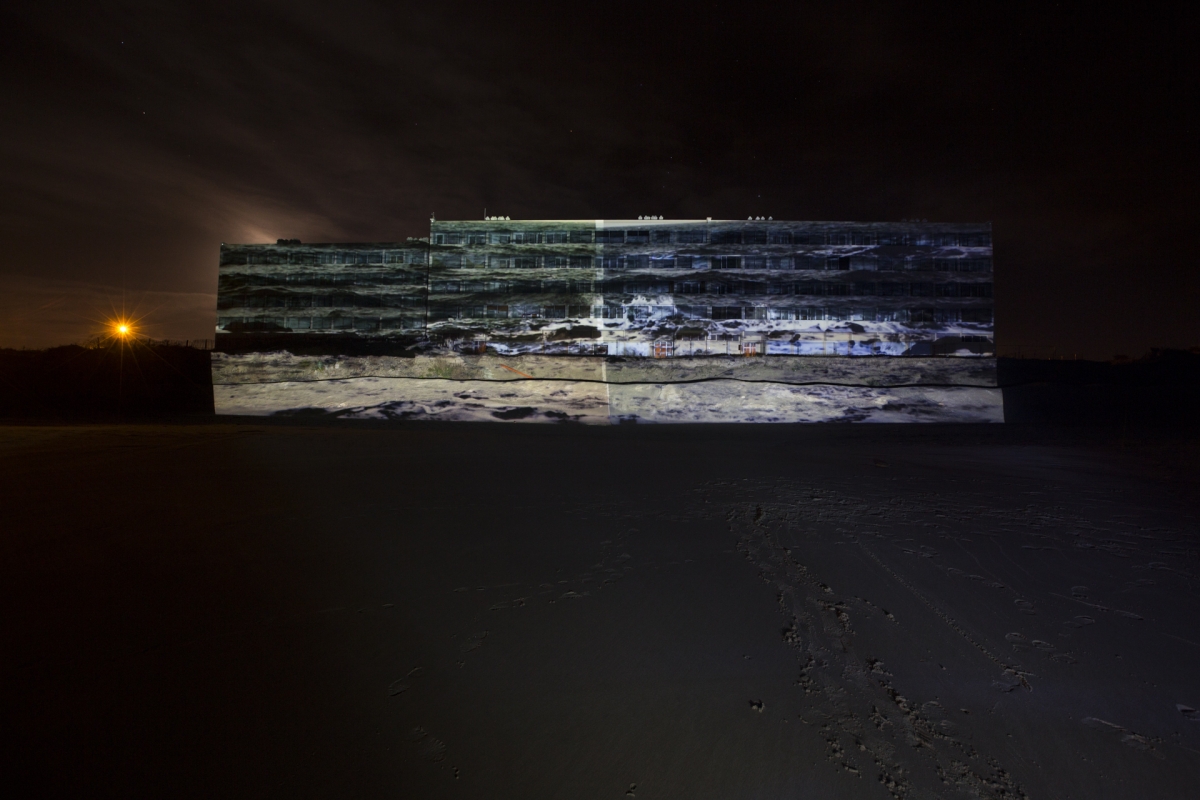 Maintenance of the Signal
Installation composed of 3 videos from the performance of 11 March 2015 and 2 collected objects
Performance: sweeping a stairwell of the Signal
– 1 broom and the maintenance schedule
– 3 projected videos, 1080, vertical, colour, sound, 3′, 4′ and 5′, in loops, desynchronised
Variable dimensions 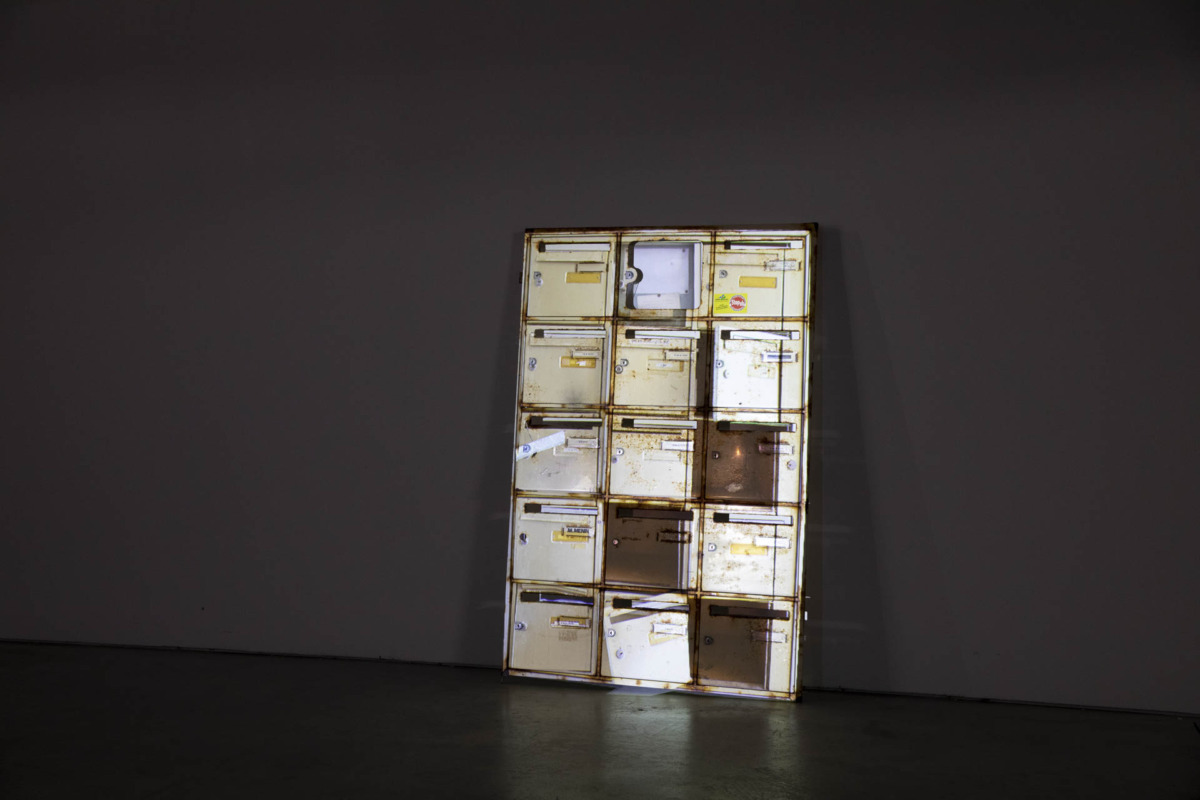 Model flat, next to the Signal
Photograph of the projection on 20 February 2019
– 1 digitals photographs, High resolution, colour 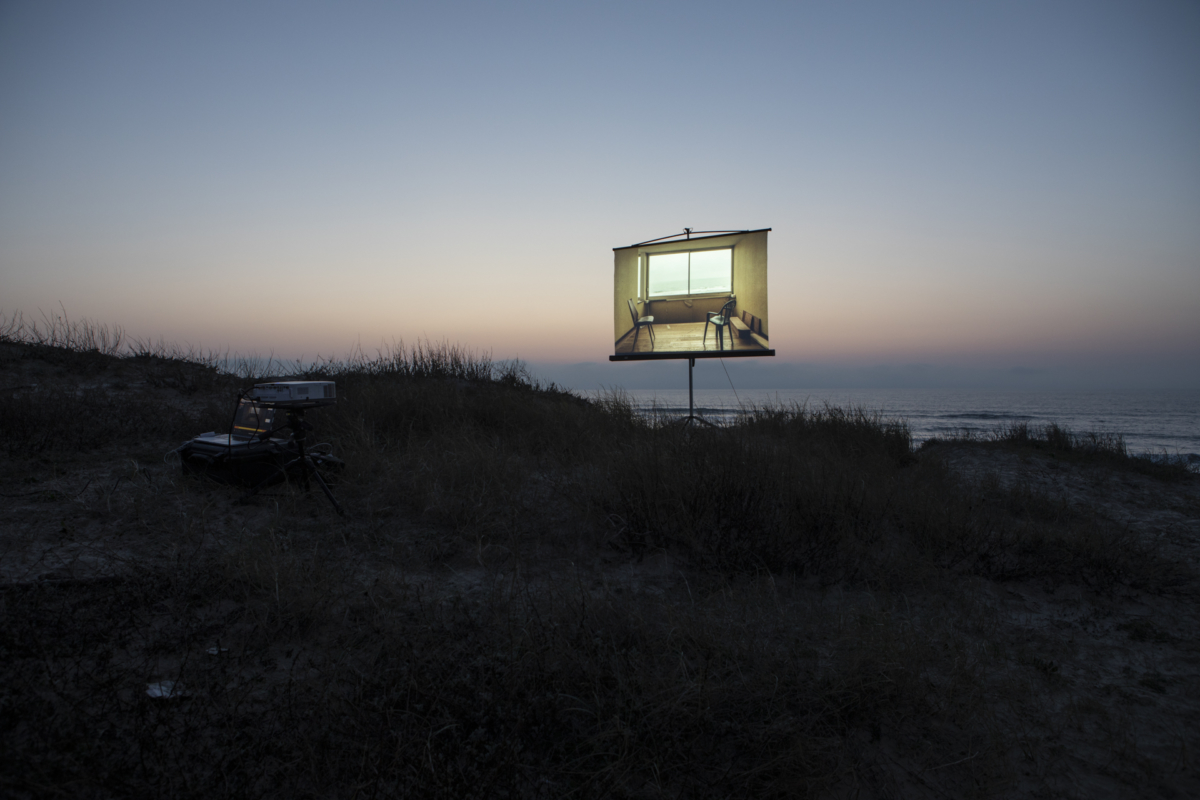 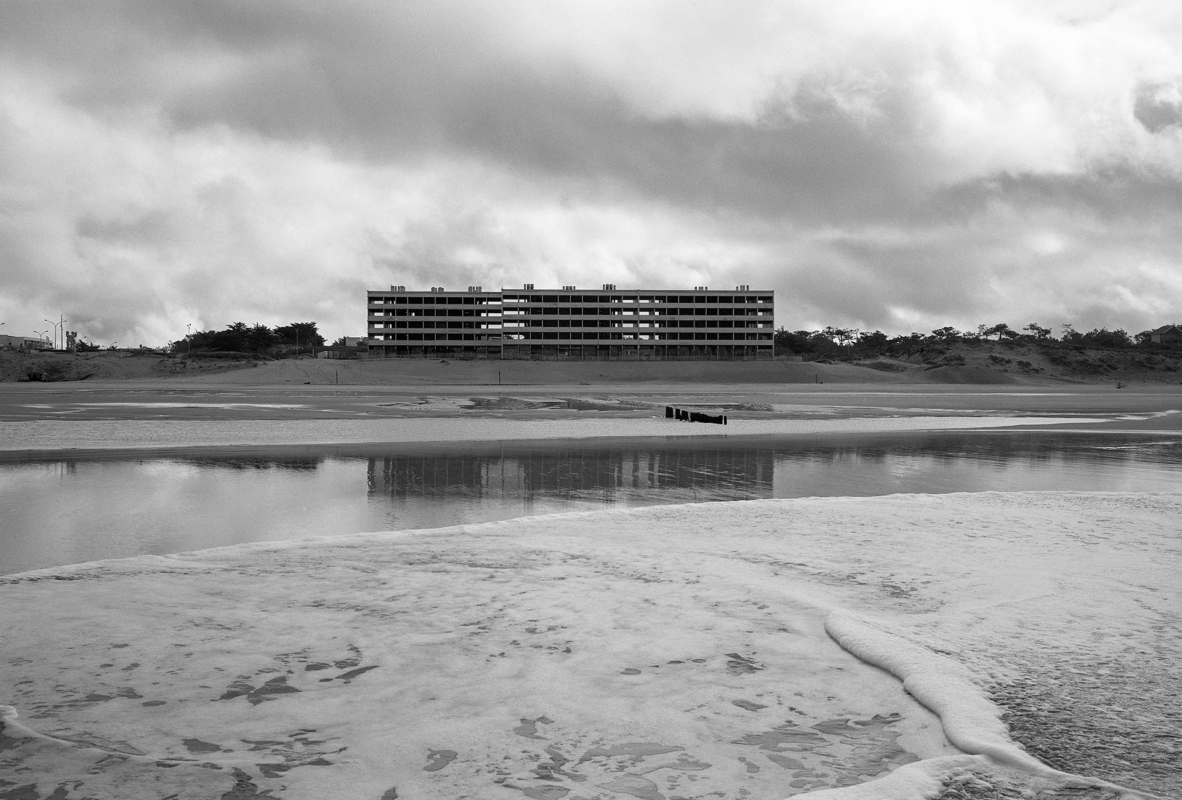 Souvenir, 2019
Installation including a video projection of a window of the Signal aand a text written and read by Sophie Poirier
– 1 chair and 1 lamp
– 1 video, 1080, colour, sound, 3′
Variable dimensions 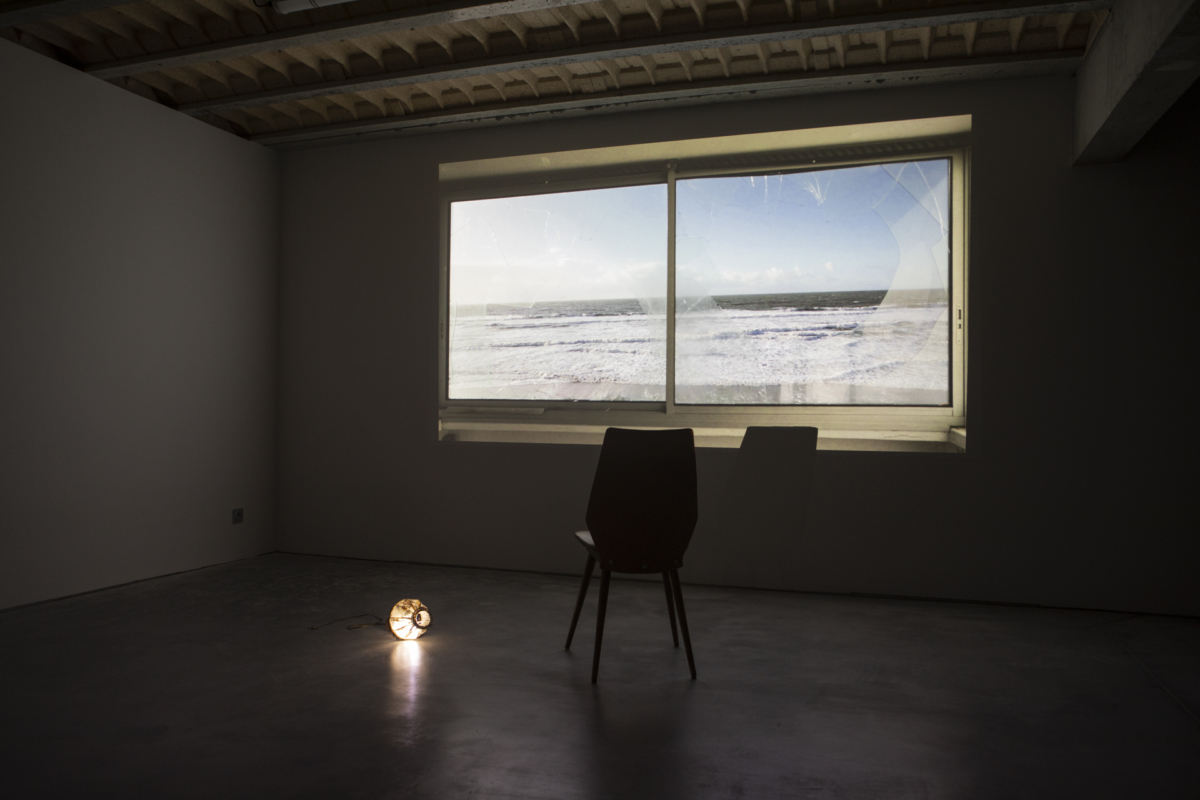 Work in progress until his disappearance…